In October 2015, Emma made the decision to hang up her boots after 26 years as a partner in a law firm. Her kids were growing up fast. It was time to leave behind the work-hard, play-hard world of international commercial real-estate with its physically and mentally demanding projects, to spend more time with her family. She never envisaged she would have to confront an even more momentous challenge to her emotional and physical resilience, than anything the law could throw at her.

It was in the gap between Christmas and new year when, on routine self-checking, she felt a lump in her left breast. She’d had an aching armpit for a while, and had been brought up to check herself regularly. Her mother being a breast cancer nurse, and having had cancer herself, had drummed this into her.

Scans and biopsies revealed a grade 2 tumour in her left breast. After a number of lumpectomies, she was advised by her consultant that the mass of the tumour could only be removed by a mastectomy. As the tumour had not spread to her lymph nodes, she was told that radio and chemotherapy were not necessary. Although the news hit her quite hard, Emma felt relatively confident it was under control.  “Sometimes my husband and I disagreed on the treatment route, but I had complete trust in the medical profession throughout,” she said. She accepted the advice she was given, agreeing also to go for breast reconstruction.

Luckily for Emma, she has been cancer-free for five years now. She has regular annual check-ups which do make her rather anxious. Sometimes she wonders whether her lifestyle has played a part. “There’s no doubt that I had quite an adrenalin-fuelled and hectic lifestyle for quite a number of years,” she says. “Drinking, smoking, excess coffee; plus the stress of my physically and mentally demanding job. I’m pretty sure all this didn’t help my immune system.”

Having had breast cancer, Emma now knows much more about the benefits of preventative action, such as having a healthy lifestyle. And she tries to pass on this insight to her daughters, both teenagers, though they don’t always listen. “Would I have listened to all the advice at that age if I knew what I know now? I’m not sure,” she says. “But one thing’s for certain, people should have the information they need so they can make an informed choice for themselves.” 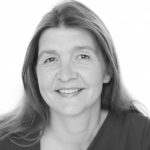 Emma is a Trustee for Breast Cancer UK.

Breast Cancer UK is working to prevent women like Emma from having to go through the devastating effects of this terrible disease.  We can only do this with your support, please donate today to support our work, thank you.