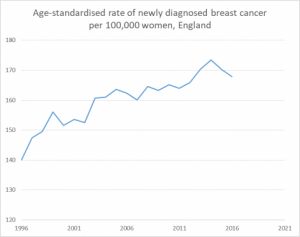 New figures released by the Office of National Statistics (1) show a small reduction in the number of breast cancer cases reported in England.

This is the second year in a row a drop was seen following decades of annual increases. In 2016, there were 123 fewer cases of breast cancer diagnosed than in 2015 (2).

Significantly, age-standardised rates (i.e. rates that have been adjusted to account for different ages in a population) are also slightly down on the previous year in both men and women (3).

fallen by 0.85% over one year (between 2015 -2016)
risen by 3.45% over the last ten years (2006-2016)
risen by 96% over the last forty-five years, since 1971 when figures were first released.
Breast Cancer UK cautiously welcomes the news that fewer men and women have been diagnosed this year but greater focus and attention is needed to promote prevention and understanding of the risk factors for breast cancer, if incidence rates are to continue to fall. In England, 45,656 women and 304 men were diagnosed with breast cancer, 19% of those women diagnosed were under the age of 50 and 4.4% were under 40.

Lynn Ladbrook, CEO of Breast Cancer UK said “we welcome any drop in breast cancer rates, however small, but sadly, breast cancer incidence rates remain high, and 1 in 8 women are still predicted to get breast cancer at some point in their lives. We will have to wait and see whether this small drop turns into a downward trend in the next few years. However, although we can’t prevent all breast cancers, a greater awareness of the risk factors, healthier lifestyles together with actions to reduce exposure to harmful chemicals could help reduce incidence rates in the future.

Studies suggest that the vast majority of breast cancer are attributable to modern lifestyle and environmental risk factors – if we can address these, we can help to prevent breast cancer”.

2. Registrations of newly diagnosed cases of breast cancer in England 2011-2016

3. Age standardised rates of breast cancer per 100,000 women in England over the last 20 years

This October we’re calling on people to ‘take five minutes’ out of their day during Breast Cancer Awareness Month to discover the simple lifestyle changes that could prevent a staggering...