I thought it would be the BRCA1 gene, but testing showed I don’t have a BRCA1 mutation

“I thought it would be the BRCA1 gene, but testing showed I don’t have a BRCA1 mutation,” she says. “I set off to find out why I got cancer in the first place, and what I could have done to prevent it. And how I could help other women in the same situation.”

It was also through her mother that Jacquie got involved with Pink Ladies. “She was a beautiful soprano singer,” says Jacquie. “She went to Pink Ladies for community support after her cancer diagnosis and realised they had a choir. And later, I got roped in to sing, which is when I realised what a breath of fresh air it is for our health and wellbeing.”

The Pink Ladies Cancer Support Group was established in May 2005, and The Pink Panthers male cancer support group began in 2015. Both groups, alongside the Carers group, provide support in the local communities of Derry, Donegal and the greater Northwest.

As Jacquie continued her research, she came across Breast Cancer UK (BCUK) and learned about the Ambassador Programme. She signed up but then had to start radiotherapy treatment, which made her too tired to continue. After she recovered, she found the programme wouldn’t be available for another year. So, she decided to write her own and is now the Education and Prevention Officer with Pink Ladies.

“There was nobody in the north of Ireland doing it,” she explains. “So, I was encouraged by BCUK to develop and launch the programme here in Derry. BCUK’s support has been amazing.”

Then three words changed Jacquie’s life: endocrine disrupting chemicals (EDCs). She heard the phrase on the local radio, which was interviewing Lisa Connolly, a professor at Queens University, Belfast about the PROTECTED ITN. The project is developing protection capabilities and specialised knowledge about endocrine disrupters. Jacquie contacted Lisa, who invited her to the lab.

“I saw how a tumour similar to my oestrogen-fed breast cancer tumour responded to a small amount of BPA,” says Jacquie. “And I explained how I felt about the importance of this type of knowledge, and how I wanted to be the conduit between the scientists and their ‘science speak’ and the layperson.”

Jacquie emphasises her lack of a scientific or medical background but realised that multiple re-readings of the science meant she could understand it.

“It became my mission to create a cross-border education and prevention programme,” she says. The resulting EDC workshop has been delivered to a group of MPs in Westminster, to Brussels, and to Leinster House.

Recently, the Pink Ladies choir persuaded the medical staff at the North West Cancer Centre to form a choir, and the two choirs held a ‘Celebration of life’ concert, singing together at the Guild Hall. “It broke down all the barriers and was quite emotional, ” says Jacquie. “The fixed and the fixers come together. We’re standing beside our oncologists or our radiotherapists, people we might not generally have a conversation with, but we’re singing together.”

An original composition about the women’s life journey in lockdown was recently created to celebrate the choir’s 10th birthday and Pink Ladies 16th birthday and released on YouTube.

“It sums up what the Pink Ladies do,” says Jacquie.

Back on the education and prevention trail, Jacquie says her latest campaign for 2021-2025 is demanding that the Northern Ireland counsellor strategy include some form of prevention on EDCs, similar to the EU work on identifying potential hazards to human health from EDCs.

She emphasises the importance of early education. “We go into schools and talk to teenagers about the signs and symptoms of breast cancer or ovarian cancer and the prevention message. I firmly believe this needs to start at even younger ages, and I’ve developed a primary-level prototype, along with a colouring book short story so younger children can understand cancer and its effects.”

She emphasises the help she gets from BCUK is invaluable: “We’ve taken part in focus groups, and shared the results with our Pink Lady members. Thalie has spoken at our world cancer day events and always brings us up to speed about what they’re doing, and that’s such valuable information. They’ve helped us be more aware of all aspects of prevention, including environmental toxins and diet.” 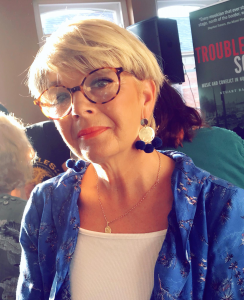 Jacquie is adamant that any information has to be science-based and accurate. She mentions a recent doctorate by Melissa Kelly on the public perception of EDCs, which used the Pink Ladies support group as her main focus group: “We realised many people take their information from social media. So, what we do has to be correct. It has to be right. The links have to be reputable sources, otherwise, you lose your credibility.”

The prevention message is spreading, Jacquie says: “Team Derry is a campaign encompassing Team Sorcha, a group of young women who are lobbying for a cervical smear test on-demand, as opposed to being available only to women who are 25 or older. Many women are presenting with the signs but are under 25 and not offered the test.

“So we combined that campaign with one about bone sarcoma, called Pauls campaign and mine regarding endocrine disruptors. It all came together as a comprehensive prevention campaign.”

As Jacquie concludes: “We’re a community-based conduit between the science and the women and men who need those facts in a way that’s easy to understand. We raise awareness about the signs and symptoms of all cancers and offer Prevention advice – Prevention with a capital P that includes environmental risks.  We support people and their families on that whole cancer journey. We try to do the best we can.”

It’s not only their track record in Breast Cancer research which puts Breast Cancer UK on the map, but also how they carry out their research, which has made it...

Our research: what do we fund and why we fund it

Breast Cancer UK funds animal-free research that explores the link between breast cancer and potentially harmful chemicals found in everyday products and the environment. This science blog explains why we...

"We started off as just three guys, looking to do some exploring for a worthwhile cause, " says Jack Martin, one of three teammates who make up The Biker...

There’s an expectation that after treatment you move on, in my case that’s not so

"Everyone has a stereotypical view of the journey, don't they?" comments Charly McNelis. "There's an expectation that after treatment you move on with your life. In my case, that's just...