Liz Johnson and her friend Theresa both have children who attend the local rugby club in the town of Oswestry on the Welsh border. It’s a close-knit club at the centre of the community, but recently the two ladies’ worlds were turned upside down when they were diagnosed with breast cancer within weeks of each other.

Liz had, in fact, considered skipping her mammogram appointment on that day, which made the impact of her diagnosis all the more alarming. The appointment had come at an inconvenient time because she had recently started a new job. “There was no sign of a lump in my breast, and it was after all Covid times – these seemed like good excuses not to go,” says Liz.  “Now I’m so glad I didn’t miss it.”

Liz was advised to have the lump removed and a mastectomy at the same time. Despite reservations because of Covid, she knew it was better to bite the bullet and get it sorted. The experience wasn’t easy because she was forced to go through it without the presence of her family. On the morning of the operation, her husband Stewart dropped her off at the hospital door. “The worst bit was walking in on my own and being thrown into this environment of people who are there to make you better – but you don’t know anyone, says Liz.  “The only people I had to support me, even though they were lovely, were in visors and masks.”

Back in her hometown, members of Oswestry Rugby club were shocked when they heard about Liz and Theresa’s breast cancer diagnoses, especially as their club president had recently been diagnosed with prostate cancer too.  They decided to rally around and organise an Ironman fundraiser for both breast and prostate cancer. Stewart Johnson, Liz’s husband has been one of the instigators of the fundraiser. “Once we all got together and shared stories, we realised how many of us had been touched by cancer and how close this disease is to most of us,” he said.

And being a rugby club, in true sporting fashion, they’ve decided to get competitive and set up two teams – one each for breast and prostate cancer – challenging each other to see who can raise the most money whilst also raising awareness. “The great thing is that we’re really a big happy family of all ages, sizes and abilities,” says Stewart.  “Our youngest girl, who is sixteen will swim 2.4 miles alongside our oldest competitor at 75 (the club’s president) in a local freshwater lake – quite a challenge.  Experienced sportspeople will be guiding the less experienced.”

Some people who’ve not cycled for years have decided to dust off their bikes to attempt the full 112 miles.

The date they’ve chosen, 19th September, will be the first anniversary of Liz’s mastectomy. But it was also chosen for its moderate weather and the hope of a retreating pandemic.  “I know I’ll be really lucky to be able to celebrate on that day, so I want to spread the word about how important it is – if you are offered a mammogram appointment – to keep it. I nearly put it off and I’m so grateful I didn’t,” says Liz. 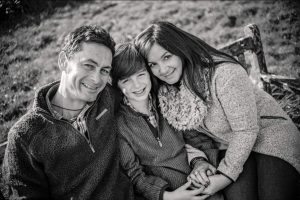 Liz’s friend Theresa has also had treatment and is doing well, though her breast cancer was not caught so early. Both women’s sons are the same age, play rugby for the same team and attend the same school, so they have been lucky enough to be able to support each other through these times.  “It’s hard for the children,” says Stewart. “But at least they have each other. And I’m now really conscious of how prevention and early detection of cancer are essential. Those, for me, are the reasons why we are still together as a family right now. It could have been a totally different story. Our Under 12’s team at the rugby club has 16 boys, and with two mothers getting breast cancer, that highlights how common breast cancer is, right there.” It’s the reason they made Breast Cancer UK their charity of choice.

Players, parents, and family members of the Oswestry rugby club are currently training hard for their fundraising Ironman event.  Two teams – each with five cyclists, five swimmers, and five runners will be competing to raise £15,000 each for Breast Cancer UK and Prostate Cancer UK. Please give generously to support these ambitious athletes on their journey!

Swap a negative habit for a postive one

"You can swap one habit that may be negatively impacting your life for a positive habit, and that helps all the other areas to start falling into place, " says...

Help support our scientists conduct their vital animal-free research into the causes of breast cancer.   Christmas is a natural time to look back and...

"That's what attracted me to BCUK – their professionalism, and emphasis on the scientific research approach to preventing (breast) cancer rather than offering support after a diagnosis, " comments Elspeth...