A channel swim needs a lot of advance preparation, even then, there’s only a 50-60% success rate

Breast Cancer UK is delighted to be the chosen charity by one of our supporters who is aiming to do a solo swim of the English Channel. Please support him on this amazing journey!

Malcolm Swarbrick is a man with an important mission – to swim the channel solo and raise funds for Breast Cancer UK at the same time.

For Malcolm, it all started when swimming became a real proficiency and passion when getting involved in a variety of challenging Triathlons, including a number of full distance Ironman triathlons.

He also completed an English Channel three-person relay which culminated in a successful fourteen-hour swim. This inspired him to consider doing a solo swim and use it to raise money for breast cancer, as his grandmother had the disease, and friends and some of his colleagues had also been diagnosed over the years.

Breast Cancer UK is humbled to be chosen as his charity and delighted to support his journey, not least because undertaking a mission like this requires extreme and exhausting training, with no guarantees of completing the journey, which is weather and tide dependent. It is also very cold and this can be a real challenge to overcome.

“Doing a channel swim needs a lot of advance preparation and, even then, there’s only a 50-60% success rate” says Malcolm. “I can be match fit, but if the weather and the tide are against me there’s only so much I can do.”

Malcolm had to book his tide slot, with a registered pilot and observer from the Channel Swimming and Pilots Federation two years in advance. And the actual crossing, when it happens, could take around 16 hours (hopefully less). 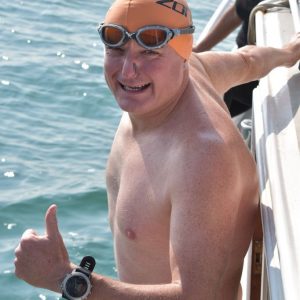 Nevertheless, he is determined.  He trains religiously, 6 swim sessions every week and, in the last 3 months, the weekend swims have been around 5 and 6 hours long for each swim whatever the weather, to ensure his physical condition is at its peak. And the temperature of the English Channel is much lower than anything in a swimming pool. Once he’s got the required stamina and endurance level sorted, the rest is down to mental preparation and the support of family, friends and professionals.

The CSPF are the professionals who will supervise and guide the swim and keep a watchful eye when he’s swimming. They will provide an official observer to ensure the swim is completed as per the strict English Channel Rules.

Malcolm will have a support crew made up of his loyal friends, They’ll provide him with liquid food and lots of chocolate along the way!! A lot of energy is required to do the swim. But he’s not allowed to touch the accompanying boat at any point in his journey. The swim has to be completed in nothing more than swimming trunks – no wetsuits allowed here!

As Captain Mathew Webb, the first person to swim the Channel in 1875, once said: ‘Nothing Great is Easy’.

Thalie Martini, Chief Executive of Breast Cancer UK thanked Malcom for his determination :  “We are both delighted and honoured to be Malcolm’s chosen charity. It takes an enormous amount of physical and mental fitness to undertake such a task and we’ll be supporting him at every stroke of his journey.”

Malcolm will be aiming to undertake his solo channel journey between the 24th and 28th of August. You can contribute to his just giving page.

This October we’re calling on people to ‘take five minutes’ out of their day during Breast Cancer Awareness Month to discover the simple lifestyle changes that could prevent a staggering...