“We started off as just three guys, looking to do some exploring for a worthwhile cause,” says Jack Martin, one of three teammates who make up The Biker Boys. The intrepid team recently completed a sometimes-gruelling 3,100 kilometres bike adventure from Oswestry to Gibraltar, raising more than £3,000 for Breast Cancer UK (BCUK).

The three men (Matthew Paterson, Andrew Boyce and Jack Martin) have personal family-related experience of breast cancer and decided on the cycle challenge after looking at the suggestions on the BCUK website. 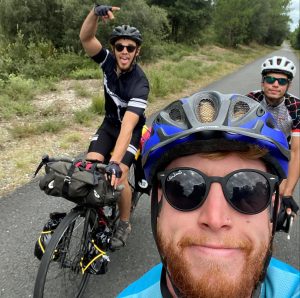 “When we started, we didn’t really have a route planned but decided we’d camp for most of the trip and end our journey in Gibraltar, ” says Jack. “We thought the whole journey would be about 2,000 kilometres.”

However, the Covid19 pandemic caused some changes in their route, and the Biker Boys eventually cycled a thousand kilometres more than their original estimate. “We cycled every day for 57 days, averaging about 60 or 70 kilometres a day, and ended up doing 3,100 kilometres,” Jack says, adding that some of the inclines in Spain were a real challenge.

The team started from Oswestry in September 2020, and for the first week travelled 413 kilometres from Oswestry to Exmouth. Jack comments they learned some lessons quickly, such as always stretching before starting out, and that early starts and some planning were both essential.

Reliable bikes were also a necessity, as Jack comments: “We’d thought about getting road bikes, but they weren’t quite strong enough. So we ended up getting a mix of bikes. I had a hybrid bike, and Matt had one that’s like a gravel bike but with fatter tires. Boyce had a touring bike. And Matt had the most expensive of the three bikes, but Boyce’s bike was the cheapest and ended up being the best by a long way. At least mine didn’t get a single problem the whole way, and it worked fine.”

Along with a couple of tyre changes, the team also had to deal with replacing an entire wheel, because of snapped spokes: “That was a bit of stress because a lot of the shops didn’t have any stock because it’s a specialist bike. So we ended up having to go to a campsite for a bit and stay there for a couple of days while we ordered something to be delivered.”

By mid-month, the team had crossed the Channel and were in France. “It all went quite well on the Atlantic coast side, it was very flat, and cycling along old canals and train tracks,” says Jack. “And we had a lot of croissants in all the different bakeries. The people were great, and lots of bike shops, which was good because we had some major bike malfunctions, including getting a new wheel for Matt’s bike!” 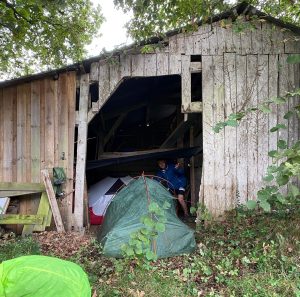 The team generally avoided the larger cities, and Jack comments they got a real sense of the countries they travelled through, especially with wild camping in some remote areas.

By mid-October, the Biker Boys had cycled to Spain, and facing a 1,000-kilometre detour. “We’d been aware of certain COVID19 regulations, but mostly when we had to wear masks to go into supermarkets. Then local curfews in Spain led to drastic route changes over some mountain ranges, including from San Sebastián through the Pyrenees to Sarrion.”

The team finally arrived in Valencia, where Boyce had arranged to leave the team. Jack and Matt continued onwards.

“We tackled some monumental days of riding, terrible weather, a snapped pannier rack and a broken wheel,” says Jack, adding they hoped the wheel would last the final 115km to Gibraltar. The Biker Boys had also raised £2,971 for BCUK.

Getting to Gibraltar was “probably the best bit!” according to Jack, especially as they had proven they could do the journey: “People from work had been like, Nah, you’ll never do it,” he laughs. “But we just went for it. And then it was like: Oh, so you’re actually doing this. Oh, right. Okay.”

Jack says the team were happy to have raised more funds for BCUK than they’d originally hoped for, reaching 161% of their original goal. The fund currently (June 2021) stands at £3,235. 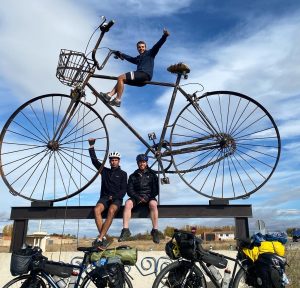 He comments: “We got amazing support all the way through. So much generosity from everyone along the way, from somewhere to stay, or bike repairs, direction, and, of course, giving to the fund. We couldn’t have done it without all that support, and we’re so grateful for that generosity because it’s really helped us raise money for breast cancer research. It’s one of the best things we’ve ever done!”

However, he adds a footnote: “As soon as we got back, we wanted to go again, the three of us. We want to raise more, so we definitely want to do something else, maybe the North Coast 500 in Scotland or something like that.”

Together let’s reduce the number of people hearing the devastating words ‘you have breast cancer'.     "When we first looked at the event,...

Guys tend to ignore these things

"My doctor went all serious and I saw him typing something on the computer.. so I sort of jokingly said: Could it be cancer? And he went: "Well, I'm not...

"If you're going to buy drinks, buy them in glass bottles rather than plastic bottles, avoid canned food, and refuse thermal till receipts ... simple things can help minimise our...

It struck a chord with people because it shows that, as a family, we’re fighting back.

"I always draw a smiley face on birthday cards. And then I do a load of curly hair. It's just always something I've done, " says Josie Jeffries, explaining how...