As record numbers signed up for Veganuary this year, our Ambassador manager decided to try it out and, as a healthy eater, she thought it couldn’t be that difficult. But things didn’t come as easily as she thought, as she records in her Veganuary diary.

At last, January had arrived, time to make the changes to my diet I’d thought about for months. After the over-indulgence of Christmas, it felt like the perfect time to try Veganuary.  I’d always done my bit for the planet and already ate reasonably healthily but for various personal reasons, I wanted to go that little bit further and take it to the next level.

At various points during my childhood there have been animals in my life, not to mention the hours spent collecting bona-fide pets such as bugs and slowworms. Because of this I’ve always found eating meat played on my conscience.  Then there’s the environmental impact of eating meat; I want to do my bit to save this beautiful world in which we live. I’m not a vegetarian and I don’t cook (hubby is the cook in our house) so transitioning to a non-meat, non-dairy diet was quite daunting but one I was keen to embrace.

I felt unprepared and realised just how little knowledge I had about a vegan diet. Due to a busy lifestyle of working and triathlon training, I hadn’t done that all important vegan shop so let’s just say that I was looking like beans on toast by day 3.

We have organic bottled milk delivered so the first thing I needed was a milk substitute. I quickly discovered soya milk and was pleasantly surprised by the taste, but I wasn’t keen on the un-ethical side.  I decided I would look for an alternative later but for now, the main thing was, it was non-dairy.

It had been a while since I’d gone three whole days without chocolate, but I’d done it. However, the temptation of a left-over mince pie was becoming too much, so the squirrels were very happy with their post-festive treat when it landed on the bird feeder (sshhh don’t tell the hubby)!

Failure? Or a learning curve?

Day 4  – Saturday was a real test as I was going out on a 40 mile bike ride with my Tri Club but I wasn’t organised with any vegan friendly energy snacks and so popped a banana in my back pocket and off I went.

For those familiar with South Wales, or Wales generally for that matter, you’ll know that it’s notorious for hills and this ride was tougher than expected. By mile 20 I could feel my energy was low and after a further 20 miles, I had very little left in the tank.  I wearily walked into my house to find my hubby rustling up a mean scrambled egg, I succumbed! Yep, you could say that I failed but was it really a failure? On reflection, no it wasn’t, although it did spiral me into eating the left-over after-eights from Xmas (only five, I promise!).

I put Saturday behind me and realised I needed to be more organised if I was going to succeed. Sunday arrived and brought with it yet another challenge, Sunday Roast, what would I do?

Organic chicken is our usual staple on a Sunday but hubby ordered chicken breasts for himself so that there would be less waste. Our dog, Lass, looked on in disbelief at the lack of leftovers in her bowl but I was very pleased with the huge plate of vegetables I had before me. Roasted beetroot, broccoli, carrots, parsnips, potato, onion, butternut squash, leeks, many of those breast cancer reducing carotenoid vegetables I’ve been talking about in our Ambassador talks. It was delicious, organic and guilt free!

I do have to confess, I succumbed to gravy! Yes “proper” gravy. Just a couple of spoonfuls but I decided not to beat myself up, after all, I’m a newbie and had made the decision that I was going to “do my best”.

We always have plenty of leftovers from Sunday and so Monday saw me consume more scrumptious colourful veggies and I easily hit my 5 a day for 2 days running. The baked beans were a distant memory and I resisted the gravy this time.

Week 2, I made sure I had a good variety of healthy breakfasts in the cupboard and by mid-week I hadn’t touched a single piece of chocolate or meat/dairy products and I was feeling really good about it.

That evening, I had two back to back training sessions to get through and so I knew I had to get organised to make sure I had all the ingredients needed for a healthy and nutritious dinner when I got home at 8:30pm.

Something easy was required which was going to use up some of the left-over veg from last week’s veg box delivery, topped up by a quick visit to the local shop. Putting my new veggie cookbook to the test, I chose lentil and veg cottage pie.

The recipe said it would take 20 mins to prepare. They obviously didn’t know how bad my veg chopping skills were! Despite taking 45 minutes to chop everything, I felt very satisfied seeing all those amazing colours together in one big dish, especially the organic vegetables. By 9am it was all ready, dishes washed, and I was ready to start work, knowing that supper was sorted and I wouldn’t “fail” when faced with being hungry. Vegan brownie points in the bag!

Later that evening, the dish was a complete success and it only took 20 mins of final oven warming for a supper packed full of super veggies which not only contain those all-important phytochemicals to reduce my breast cancer risk but a dish that was full of protein and carbohydrates to aid my muscle recovery.

I’m used to checking labels to avoid harmful chemicals in cosmetics and soaps etc, as I like to practice what I preach in terms of avoiding Endocrine Disrupting Chemicals, but I quickly realised that the majority of sweet stuff in the shops contains butter, milk or is held together by egg. My saviour came when I discovered that ginger nuts were an exception.

From non-cook to vegan chef extraordinaire!

Glory came on the second weekend in January. It was a wet and windy old day and so my thoughts quickly turned to what to cook later. Organisation certainly is the key, I had some leftover organic tofu, but I didn’t really have any idea what I should do with it. The fact that it was still in the fridge meant that my hubby had no idea either!

No fear, my friend Google helped me find the recipe that was going to make me a curry connoisseur. Not only did I make the curry, but I also learnt how to make the tofu crispy by tossing it into cornflour first. I was so surprised by how simple it was to make. I had a delicious meal with bags of protein – I’d certainly exceeded my 150 minutes of exercise for that week (or for that day even) and this was the perfect dish to aid recovery and top up on the remaining nutrients I needed. Dessert and Saturday evening treat came in the form of a small bar of dairy free chocolate with a cup of green tea…. oh well it can’t all be rock and roll.

Over the next week or so I ate more vegetables, fruit, seeds, nuts, oils, and legumes than I’d done in a month previously and had learnt to cook a good handful of recipes. Food like spinach, lentils, chickpeas, flaxseeds and nuts were becoming a normal part of my day and I must admit I was feeling less bloated and slightly lighter, both in weight and conscience.

I found a wonderful café serving the best breakfast of avocado on brown toast with vegan feta.  I honestly felt as though I was eating real cheese! My only concern was what it was made of as I don’t want to substitute dairy or meat for anything that’s processed or high in salt etc. I also found a little vegan stall at our local market in Swansea and bought some vegan cookies. Also, a vegan friend visited and was very happy I could make her a cup of coffee made with oat milk.

I’d be lying if I said it’s been easy and thinking about all the elements at once has been quite daunting.  I’ve learnt not to beat myself up over my mishaps and to transition slowly as I learn about new foods and what and where to eat.

It’s made me plan more and has got me cooking from scratch, something I’m rather proud of.  Not only that but I’ve got a full freezer of leftovers for healthy meals on busy days which avoids the temptation of reaching for takeaways. I’ve less fat in my diet, less sugar, less salt and far more nutrients, not to mention the new flavours. I’m going to continue my meat free journey, some of the changes I’ve made in my diet are here to stay and I’m looking forward to a healthier new me in 2020. 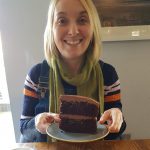 For more details on how diet is linked to breast cancer, read our Diet Briefing.

For more tips and advice on ways to improve your diet and maintain a healthy weight, please visit our Diet and Weight section.

6 tips to help you complete the Ditch the Drink Challenge

Doing a month-long challenge such as Ditch the Drink can be a great starting point for creating a healthy habit that can lead to long term benefits in your life. We’ve...

This week, world leaders gathered in Glasgow for the COP 26 summit to accelerate action to combat climate change and the impact of pollution on our planet. Our Public Affairs...

How to reduce exposure to potentially harmful chemicals in the home

Together we can reduce the number of people hearing the devastating words ‘you have breast cancer’.       We...

At Breast Cancer UK,  we are proud to be the only UK cancer charity funding animal-free research investigating the links between breast cancer and harmful chemicals found in everyday products and the environment.   To celebrate the final...